Pill Counting: Where It Started, Where It's Going

Wouldn’t it be great if you could eliminate the tedious parts of your job? If a technology existed that allowed you to focus more on the important stuff and less on mundane tasks? Well, we have some good news—that technology does exist!

It’s no secret that pharmacies spend a lot of time on the filling process: verifying prescriptions and counting pills. But it doesn’t have to be as time consuming as it is. Virtual verification can reduce the time spent on the former by allowing the pharmacist to perform the verification process in the cloud. An automatic pill counter could be the answer to the latter, which is why we created TelePharm Count. (We’ll share more information about our new pill-counting feature in an upcoming blog). Automated counting has made filling faster, easier, and more accurate. And, thanks to technological advancements like artificial intelligence, new machines are safer, include better features, and are capable of much more than earlier versions.

The OG method: tray and spatula

Depending on when you were born, certain technology might seem commonplace even though it was once considered groundbreaking. Before the internet existed, people had to comb through the Encyclopedia for information. Before the remote control, someone had to get up and turn the channel via a knob on the television (the horror). And before pill counting machines, pharmacy employees had to count every medication by hand using the ol’ tray and spatula method. 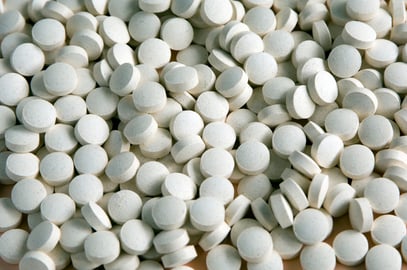 The old ways aren’t always the best ways, which is why innovation is necessary. A recent study found that the traditional hand-counting method was 42.3% slower than a rudimentary handheld counting device. So imagine how quick the process could be with an electronic device that utilized artificial intelligence.

Pharmacies could focus less on non-value-added tasks and more on activities that would benefit patients and bring in revenue. Reallocating time is a huge benefit, but it’s not the only reason automatic pill counters are so prevalent today.

Manual work is often monotonous and tiring, and bored/tired humans are sloppy humans. The same study also found that hand counting was associated with more mistakes. The error rate was 12.6% compared to just 4.8% when automated. That’s important because counting errors may impact inventory. If a pharmacy’s inventory is incorrect, it may throw off a supply count and lead to overspending or a shortage of drugs.

Repercussions aren't limited to inventory issues. A decline in work performance is also associated with manual pill counting. Research done in 2020 discovered that employees involved in the process experienced distractions, fatigue, and feeling rushed to complete tasks. These factors caused medication errors and contributed to wasted time for workers and longer wait times for patients.

With more productive employees, less time spent on manual tasks, and a reduction in errors, it’s no wonder there’s been an increasing reliance on automation in the pharmacy space, especially concerning dispensing. Current automatic pill counters use state-of-the-art technology and have some pretty snazzy features (like TelePharm Count’s ability to count translucent pills and gel caps). The basic concept has been around for decades, though. Let’s take a trip back in time to 1967 when brothers John and Frank Kirby came up with the idea for a portable, digital tablet counter to, you guessed it, count pills and tablets.

A few years later, the Kirby brothers started a company with their associate Robert Lester, patented their invention, and officially became pharmacy automation pioneers. Their new technology made counting pills quicker, easier, and more accurate, and many pharmacies across England happily adopted it. Kirby Lester machines eventually made their way to America in the mid-1970s, where the brand is still well known to this day.

Pill counters, tablet counters, drug counters, capsule counters—whatever you want to call them—have come a long way since making their debut nearly 50 years ago. Because they are less expensive than they were decades ago, and since they improved prescription filling, counting machines are now more or less standard in thousands of locations across the globe. These locations include retail pharmacies, telepharmacies, veterinary practices, university clinics, and more. But the machines of today can do a lot more than their predecessors.

From past to present: pill counting gets an update

Most of us use smartphones or tablets daily—they make our lives easier and constantly upgrade to improve the user experience. Like all other consumers, pharmacists and pharmacy technicians expect the most from the equipment they use every day. Improvements to pill-counting technology might not come as fast as they do for smartphones, but there have been several in the past 15 years.

If hearing the word “tech” conjures up images of computers and touchscreen interfaces, it probably won’t surprise you to learn that these features are now standard in numerous pill counters. Many also have the ability to connect to a pharmacy management system and verify the amount of medication dispensed via images. Plus, new models often use a database to store medication records for later reference, making the entire process much safer.

Here’s where it gets exciting, especially if you’re interested in artificial intelligence. To give you the briefest of brief definitions, AI is the ability of a computer to perform tasks associated with intelligent beings. At this point, you can find some AI in nearly all industries. One subset of artificial intelligence is machine learning, where algorithms use data to build a model capable of making predictions and decisions. Machine learning is widely used in many facets of healthcare: data collection, record keeping, clinical trials, and even surgery.

Another subset of artificial intelligence is computer vision, a process where a computer captures and analyzes images and videos. Computer vision and machine learning often get used in conjunction. Data gathered from photos helps create algorithms that allow machines to learn without human interference.

Remember when we said present-day pill-counting machines have snazzy features? The use of AI is one of them! The device detects tablets placed on the tray, counts the number identified, and captures images for the record. Over time, the machine learns to identify different types of pills by analyzing the photos it takes. Pill counting is just the tip of the iceberg of computer vision in health care. With the potential to improve health outcomes in multiple ways, you can expect to hear more about it in the future. Think of handheld MRI machines, virus detection, patient monitoring, and clinical trials.

A pharmacy future you can count on

Pharmacy automation has come a long way since the inception of automated calls alerting patients of prescriptions ready for pickup. We now have automatic pill counters, robots to assist with medication dispensing, and virtual prescription verification by a pharmacist. These innovations allow pharmacies to operate at a safer level, making the experience better for the pharmacist, technician, and patient. It’s exciting to see everyday tasks like pill counting become more efficient and accurate and to know even more inspiring technological advancements are on the horizon.

Now that you have on overview of pill counting, let's take it a step farther. Check out TelePharm Count to see how we used computer vision and machine learning to make the workflow more efficient.